The Giant Schnauzer is a breed of dog developed in the 17th century in Germany. It is the largest of the three breeds of Schnauzer—the other two breeds being the Standard Schnauzer and the Miniature Schnauzer. Numerous breeds were used in its development, including the black Great Dane, the Bouvier des Flandres, and the German Pinscher. Originally bred to assist on farms by driving livestock to market and guarding the farmer's property, the breed eventually moved into the city, where it worked guarding breweries, butchers' shops, stockyards and factories. It was unknown outside of Bavaria until it became popular as a military dog during World War I and World War II. They have a dense coarse coat that protects them from the weather and from vermin. Giant Schnauzers come in two color patterns: Solid black, and a color known as pepper and salt, with banded hairs of alternating white and black, appearing gray at a distance. Where legal, they are shown with cropped ears and docked tails. Like other schnauzers, they have a distinct beard and eyebrows. Today, the Giant Schnauzer participates in numerous dog sports, including Schutzhund. Another sport that the dog excels in is that of nosework. Due to its alert nature, the dog is also used in police work. 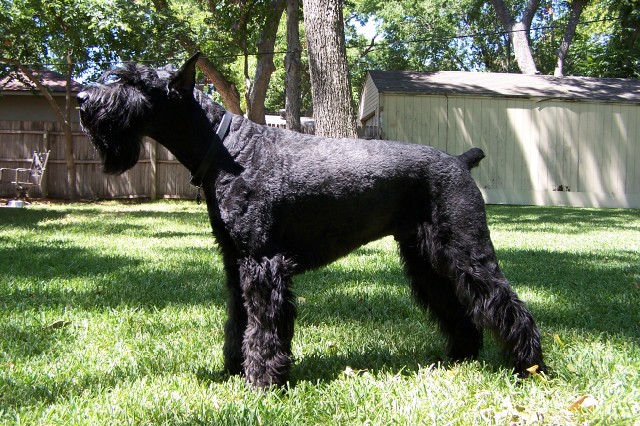