The Standard Schnauzer (Mittelschnauzer) is a dog breed that originated in Germany in at least 14th–15th century, of Schnauzer breed type and progenitor of the Giant Schnauzer and Miniature Schnauzer. Initially it was called Wire-Haired Pinscher, while Schnauzer was adopted in 1879. The literal translation is "snouter" from the German word for "snout" and means colloquially "moustache", or "whiskered snout", because of the dog's distinctively bearded snout.Generally classified as a working or utility dog, this versatile breed is robust, squarely built, medium-sized dog with aristocratic bearing. It has been claimed that it was a popular subject of painters Sir Joshua Reynolds, Albrecht Dürer and Rembrandt, but actual proof remains elusive. Standard Schnauzers are either salt-and-pepper or black in color, and are known for exhibiting many of the "ideal" traits of any breed. These include high intelligence, agility, alertness, reliability, strength, and endurance. This breed of dog has been very popular in Europe, specifically Germany, where it originated. The breed was first exhibited at a show in Hanover in 1879, and since then has taken top honors in many shows, including the prestigious "Best in Show" at Westminster Kennel Club" in the United States in 1997. 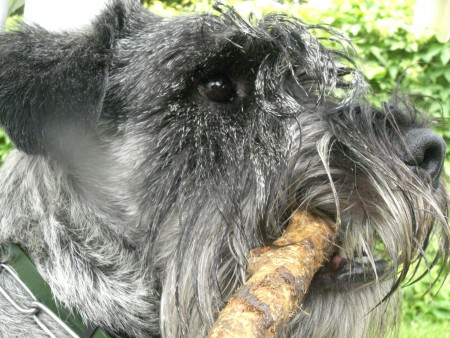