The Stabyhoun or Stabij is one of the top five rarest dog breeds in the world. It is from the Dutch province of Friesland and in particular from the Frisian forest area, a region in the southeast and east of Friesland. The breed has been mentioned in Dutch literature going back to the early 1800s, but has only extended its range from the 1960s outside of Friesland and not until the 2000s did the range officially extend beyond the Netherlands. The name Stabij translates roughly as "stand by me" with the last part simply Frisian, meaning dog, which is pronounced "hoon". The dog is considered a Dutch national treasure. There are only a few thousand Stabyhouns in existence today worldwide. 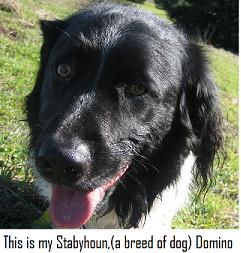