The Karabakh (Azerbaijani: Qarabağ atı), also known as the Karabai or Karabakhskaya in Russian, is a mountain-steppe racing and riding horse. It is named after the geographic region where the horse was originally developed: Karabakh in the southern Caucasus, an area which is a disputed territory, internationally recognized as part of Azerbaijan, but mostly governed by the Republic of Artsakh (formerly named Nagorno-Karabakh Republic [NKR]), a de facto independent state with an Armenian ethnic majority established on the basis of the Nagorno-Karabakh Autonomous Oblast of the Azerbaijan Soviet Socialist Republic. The breed is noted for its good temperament and speed; in 2004, a Karabakh horse named Kishmish from the Agdam stud in Azerbaijan covered 1000 metres in 1.09 minutes and 1600 metres in 1.52 minutes.The Karabakh is thought to be influenced by Persian horses and the Akhal-Teke, Kabarda, Turkoman and Arabian breeds, and it influenced the development of the Russian Don during the 19th century. It is bred primarily in Azerbaijan's Shaki region. The breed numbers below 1,000, and it is threatened with extinction. 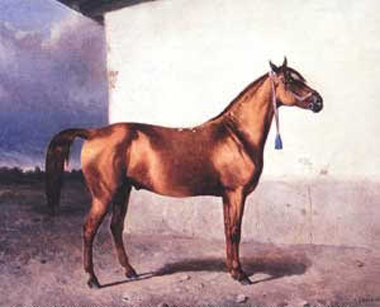