The French Bulldog (French: bouledogue or bouledogue français) is a breed of domestic dog, bred to be companion dogs. The breed is the result of a cross between Toy Bulldogs imported from England and local ratters in Paris, France, in the 1800s. They are stocky, compact dogs with a friendly, mild-mannered temperament.The breed is popular as a pet: in 2019, they were the second-most popular registered dog in the United Kingdom, and the fourth-most popular AKC-registered dog breed in the United States. They were rated the third-most popular dog in Australia in 2017. In 2019 in the United Kingdom, the French Bulldog had 375 export pedigrees and a total of 33,661 registered dogs. By comparison, the Labrador Retriever had over 35,000 dogs and the Cocker Spaniel fewer than 22,000.

The Dog Scanner app does provide a lot more information about the French Bulldog breed as well as many more.

This breed is also called Bouledogue français, French Bulldog as well as Frenchie.

Is your dog a French Bulldog?

You can use our Dog Scanner app to find out whether your dog is a French Bulldog. 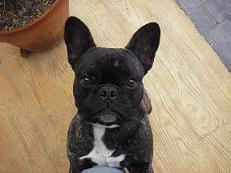