The Staffordshire Bull Terrier is a British breed of short-haired terrier of medium size. It originated in the city of Birmingham and in the Black Country of Staffordshire, it is the direct descendent of the Bull and terrier which was itself bred from cross-breeding the Old English Bulldog and the Old English Terrier. The breed’s ancestors were bred primarily for the blood sports of dog fighting and rat-baiting. With the introduction of legislation criminalising blood sports including dog fighting in 1835 and again in 1911, attitudes changed which resulted in generations of responsible breeding and further breed refinement of the Stafford as a family pet and companion dog. The Stafford's association in early 19th century as a fighting dog made it difficult for the breed to gain recognition by the Kennel Club in the United Kingdom but was eventually added to their purebred registry in 1935.The Stafford is one of the most popular companion dog breeds in the United Kingdom, as well as Australia, France and New Zealand.

The Dog Scanner app does provide a lot more information about the Staffordshire Bull Terrier breed as well as many more.

Is your dog a Staffordshire Bull Terrier?

You can use our Dog Scanner app to find out whether your dog is a Staffordshire Bull Terrier. 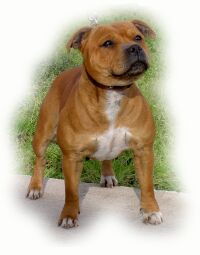